Our community garden sits on a hill, while another heavily wooded hill continues the rise behind us eastward, toward Vermont.  This picturesque setting quietly belies the insidious population (if not hundreds, at least dozens) of woodchucks. Also known as groundhogs, these waddling, middleweight rodents burrow masterfully. They joyfully excavate their little homes and then tenaciously tunnel their way right under any and all barriers to early spring vegetation. Which, while waiting for the wild plants to sprout, includes a delicious twenty-item salad bar conveniently located right in their own neighborhood, a snacking opportunity otherwise known as my community garden.

For three summers I have battled woodchucks. “Battle” is not the most accurate word, since I tend toward nonviolence—so I haven’t engaged in hand-to-claw combat, or even met them up close–but fear not, their presence is clear.

My plot adjoins the first groundhog-hole-under-the-fence that the locals dug my beginning year, when the voracious critters rapidly decimated my early-planted oak leaf and bibb lettuces.

Even as I joked with my fellow gardeners when we discovered the damage, I was heartbroken, and dispirited.  Emails flew back and forth about how difficult these invaders are:

“Woodchucks?—might as well give up now.”

“They WILL destroy your plants, and are impossible to get rid of.”

I wondered what I had gotten myself into. Would this Community Garden thing really be worth it?

At some point that initial summer the gardeners rallied and plugged the holes, making the woodchucks reroute their speedy access over and over again; some folks fenced their individual sections, though I didn’t get quite that far.  Finally, the groundhogs found enough tasty morsels outside of our chain link, and we breathed easier.

Last year, my second year, I planted spring greens and then had to go out of town; I returned to nibbled-away spinach and the weeds that replaced it—It’s too late, anything I do will be destroyed; these nuisances are too numerous to deal with… If I weed now, isn’t that just a big “Come munch me” sign to the woodchucks?  Finally, I volunteered to be the Garden Coordinator and now have the worst looking plot in the place!

I became very sporadic in my garden visits.

But one day I discovered that later seeds, half-heartedly tossed into the soil, had sprouted into sturdy, sprawling, bristle-legged plants, some with orange blossoms promising vegetables to come. The arugula I had allowed to overtake my lettuces seemed to have repulsed the woodchucks, as tender pale frisee revealed itself, barely alive under the weight of now-overly-spicy leaves.

That second year I harvested more salad than the first, and went on to reap more than enough cherry tomatoes to pop into salads and put up for the winter. My belief in Community Gardening was strengthened.

With memories of the previous summer’s bounty dancing in my head, this year I started in promptly on planting.

During the first official workday in April, while I coordinated Perimeter Litter Cleanup and Getting To Know Your Weed-Wacker sessions, my newly recruited garden-mate cleared weeds in our plot; then I joined him to add the peat and compost, form mounds, plant seeds in double rows, and even put in a row of little cauliflower seedlings, carefully selected from the store for healthy stalks and lack of yellow leaves and well-developed but not overgrown root systems.

I came back two days later and saw the plants chomped down to the ground, just one half-eaten cauliflower leaf to identify what had been there. Once again I felt discouragement in my gut as I surveyed the other, untouched-as-yet plots, and sighed.

So, you thought perhaps the woodchucks weren’t around yet this spring? Or that they’d become stupid over the winter? Well, wrong on both counts!

After a phone consultation and determined trip to the hardware store, my garden-partner and I returned to erect an orange plastic fence around our plot, digging slit trenches to bury the bottom edge underground. We sweated, we dug, and rather like Bill Murray in Caddyshack, we cursed the little buggers while giggling at our own nefarious devices.

We still worried they’d get in—one vision involved finding woodchucks on their backs crunching carrots like babies sucking bottles; instead on the next few visits, we found the protected plot lavish with young basil and parsley, nasturtiums and acorn squash, and even volunteer tomato plants sprouting up!

As May turned into June and then July, the whole garden community worked to block the outer fence holes, continuously looking for new holes and filling them. Emails chimed in, this time encouraging each other:

“S has extra fencing if anyone needs it.”

“We just have to wait them out, til the hillside plants give them enough to eat.”

“Stick your weeds into containers with some water and let them rot; then pour the decaying smelly stuff all along the fence-line.”(That one was fun.)

The survivor from that initial vegetable holocaust come back from its gnawed state to inch by inch grow some stunted leaves, and then larger ones, and it finally produced a single creamy-bumpy head of cauliflower–which I harvested this third week of August. 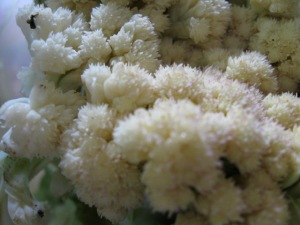 the “White Cloud” Cauliflower that pulled through…

But I have received more out of interactions with woodchucks than just, well, the skills of dealing with insistently burrowing rodents.

More on that, next week.