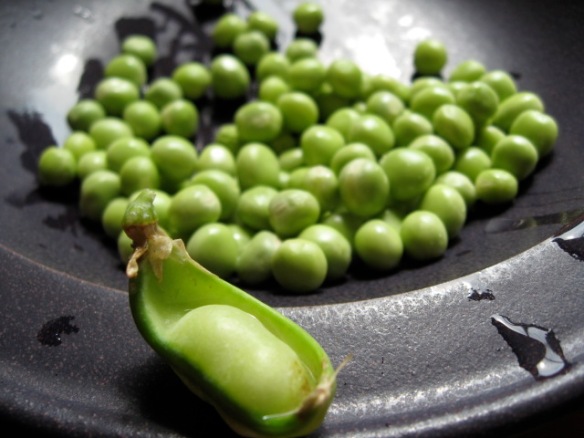 Peas and where they come from

I planted the seeds in May, thinking of slim pea-pods stir-fried with rice, but then the plants bleached in the July sun while I was home sick. Finally working in the garden, I thought, Damn, they are done, I left them on the vine too long! but harvested anyway. Maybe there will be some that are still tender….

Back in my kitchen, the pale, bumpy, now-inedible pods surprised me with actually-edible peas hidden inside! This gardener didn’t realize they’d continue on and make something different, like green bell peppers ripening into red.

The big pile of Pisum Sativum pods yielded four ounces of fresh peas—they are sugar snap peas; that’s what I planted, and now I know the difference.  For stir-fry alone, I could have planted snow peas. And if I’d gotten to these sugar snaps sooner, the pods (considered a fruit) would have been edible along with the green vegetable globes. Of course if I had just wanted plain ol’ peas, “shell” would have been the variety for me.

I discovered all this in my favorite educational cookbook: From Asparagus to Zucchini: A Guide to Cooking Farm-Fresh Seasonal Produce 3rd edition by the Madison Wisconsin Area Community Supported Agriculture Coalition, 2004. (You can check out MACSAC here.)

My other lesson for the day–Some of the peapods made just one pea. The thick skin cupped and protected a single perfectly shaped emerald ball.

I used to be like one of the pods that made five, six, seven of these beauties, boom-boom-boom, lemme make some more! —  I believed I had to be the pod that constructed the most and the most exquisite peas!

But look–here is a capsule, so cute, so delightful, that curls around just one pea. Or maybe two, as in my photo, both well formed.  What does that say about production schedules, quantity and quality of what we make?

Sheepishly, I admit now that I don’t have to make “more”, “most”, “better” all the time. Just one pea can be enough.

Some of the pods, bulky and hard to open, reveal withered peas, a few undeveloped blips, little nubs of pre-pea. The cases looked good, but the contents are not as promised.  I don’t want that, either, to half-heartedly construct a life, the outside looking good but the inside empty.

Or, if I see these as unborn creations, ones I didn’t have time or attention for, I could mourn, but not fret too much over them.

Because there are plenty of seeds and soil and water, if I just keep returning to the garden. And thus, plenty of pods to come.

Here’s what I made with the peas, again adapted from a favorite Moosewood Cookbook recipe; the original Sri Wasano’s Indonesian Rice Salad involves among other things pineapple and peanuts which, as you may imagine, is a whole different taste sensation.

This is not the originally fantasized stir-fry, but satisfied my craving for savory rice with veggies. I served it with a butter-and-olive oil broiled, seasoned whitefish. 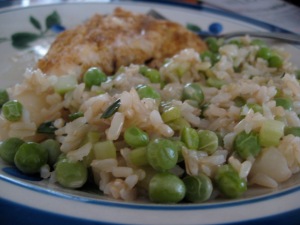 1 ½ cups of (organic) basmati brown rice, cooked in 3 cups of water–while still hot, mix with 4 oz of fresh peas steamed for about 8-10 minutes or until soft, 6 TB of toasted sesame oil, 6 TB of honey, a couple stalks of chopped celery, ½ bunch of chopped scallion (green and white parts), a can of chopped water chestnuts, 1/8 to ¾ tsp of cayenne pepper depending on how spicy you like it, salt or soy sauce & fresh ground pepper to taste.