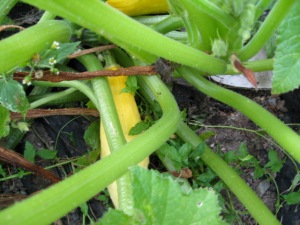 Last year R, who gardens in a nearby plot, caught me early one morning: Have you found any squash beetles yet?

Squash beetles? The last moment of my baby-gardener innocence…

Yeah, I read about them on the website; here, let me show you what they look like….as he flipped over a big hairy leaf, to reveal even rows of orange eggs along the thick plant veins.

You can control the beetles by squishing them with your fingers before they hatch.

Ewwww, I thought.  But I saw the damage already present in his plants.

Ok, I can do that, I said out loud as I dutifully smushed the few eggs in my own territory. And mashed the increasing masses of eggs on the next visit, and the next few visits after that. My flowers developed into zucchini, acorn and butternut squashes by end of summer, as I researched the critters online, saw the destruction they were capable of, and stayed vigilant in their pursuit.

This year I am a squash beetle pro.

The nymphs are particularly icky—those orderly rows hatch into black-legged, white-bodied reminiscences of the robot spiders of Stargate SG-1; they rapidly swarm the leaf undersides, and stir up an ancient human response: Run away! Run away! As adults, they grow grey shells and crawl around as recognizable beetles, and so don’t engender quite the same gut reaction.

In fact, I haven’t taken pictures of the adults or the lines of eggs, figuring people could just look that up if they were so inclined. Shudder. And the little spider-like stage, well, they skittle away too fast to take pictures. Double shudder.

I have a dear friend who works my plot with me. Because the squash beetles in all their forms (but especially the alien-invader nymphs) horrified my garden-mate when he first observed them, I take it on myself each time we weed to quietly dispatch the egg masses without comment, rubbing them to annihilation between my gloved fingers, sometimes even taking the whole leaf off and boot-grinding the nasty things into the afterlife.

This morning we went to the garden to weed and harvest again, and my garden-partner shivered as he noted, Yup, there are more of those creepy beetles.  I moved in to take care of them.  Later we pulled out a non-producing squash, found a gigantic zucchini hiding under another plant, plucked some sweet sun-colored summer squash, and then he jumped back—Ahh! There’s a g-d spider in here and it’s huge. I haven’t seen anything that big outside of the Adirondack woods!  He caught his breath: Whew! It reminds me of the tarantulas back in Oklahoma that were so large they’d bounce their way across the highway. Literally. Boing, boing, as the cars went by.

Well, this one wasn’t quite that sizable, but was enormous compared to what we’d seen previously in the garden.

Very quickly, the initial startle was overcome by admiration for the arachnid, as we snuck in closely but carefully to observe it.

Bright yellow markings on its back led us to the nickname Old Yeller. It wasn’t a stray like the loyal dog from the book, but rather a creature that belonged right where it was.  Neither did it embody the “ugly” of the original character, but instead stretched out lithe chestnut legs onto a beautifully crafted web in the corner of the pole beans.

Our final thrilling discovery– it was chomping away on a silk-wrapped adult squash beetle!  Tasty I suppose, if one were a spider (a bug-burrito, a calzone of creepy-crawlies) but who cares about gastronomic preferences when your nemesis is being destroyed? Not me.

As we harvested the pole beans very cautiously around its bug-catching lattice, we cheered the helpful spider on: You go, Old Yeller! You’re a pal! Git those squash beetles!

Of course, I don’t know what kind of spider it is. (Arachnologists out there, any ideas?)

We worry a little it’s something poisonous that we’ll have to steer clear of, but, as I was musing afterwards, There’s lots of “dangerous” out there in the world--mosquitoes carrying West Nile Virus, ticks with Lyme Disease, and heck, even humans who will T-bone you with their truck because they are too busy texting.

So I can live with “dangerous.” Especially if it’s swallowing those horrid squash beetles.

3 thoughts on “Squash Beetles and Old Yeller (not the dog)”