February 15, 2015. Last night the butterfly drank from the spoon of honey-water, then went to the window corner, and when I nudged gently to make sure her wings weren’t stuck, she flew behind the radiator and I haven’t seen her since.

I just took a flashlight and looked into all the dusty nooks and crannies of the peeled-paint housing. No sign of a body, or active cobwebs. She could have flown anywhere, then. She’s not on the wall, not between the wall and radiator, not on the floor. Just scraps of a dead ant, a binder clip that fell down there, a slip of paper, and a dried up pea from last summer’s garden (oh my).

The original peas with pasta, summer 2014.

The sun is bright, even though it’s mid-February. I haven’t seen my butterfly friend since the other day when she fluttered down to behind the radiator. But when I swept and (I will admit) got my flashlight out to see if she was down among the ancient dust puffs I can’t reach and I saw no sign of her, I was relieved I hadn’t accidentally set her into the path of spiders or too-hot surfaces. I invite her out: the sun really is beautifully warm this morning, come see! but I also know the wind is bitterly cold and comes through my 1920s windows. Other spaces might be more temperate for a butterfly who found herself in the wrong climate, at the wrong time.

The other night she fluttered up high to where my vases are stored over the sink; I realized the next day when I found her down on the side of the sink, resting on a half-window screen (stored there for when I over-toast my bagels and have to open windows to keep the smoke alarm quiet) that she went up high because the overhead light at night is like the sun, the sun she was seeking hard against the glass during the day. So that night I turned off the light, so she wouldn’t fight and fight and beat herself against it.

I put the overhead light on for a few hours after I lost her but she didn’t come out. I could imagine she is dead, worn out, captured by spiders; or off on an adventure I can’t see, in the corners of my kitchen. Dainty sulphurs live about a month or less I have read, and her color wasn’t the brilliant green of a just-hatched butterfly; she may have been middle aged like me when we first met. Humans are storytellers; humans look for meaning and relationship, even if it is a stretch. Particularly when it’s pleasant company.

My refrigerator hums behind the tick of my battery operated bird clock and the backing-up sounds of plows and Caterpillar backhoes moving snow. As I listen, I understand we travel in and out of others’ lives, even insect and animal and strangers’ lives. I think of prisoners making friends with roaches and mice.

I have discovered in my photography that fleeting creatures, the iridescent green or bright yellow that flits by—when you study up-close, can appear grotesque, nightmarish, all maw and pincers and huge bulbous eyes. We must look odd and out of perspective to other creatures, if they perceive at all like us.

September (paper wasp I believe) in the greenhouse at the Minneapolis Sculpture Garden.

Appearance is also how we can make those who don’t look like us “the other,” and justify killing them off.

During my time in the peace community it was hammered into us (non-violently of course, we’d joke) that our mission was to make it not Us Versus Them, but rather All of Us Together. Even if our goals and lives and cultures are different.

I think about how the traditional Jains, in their absolute belief in ahimsa (non-violence) cover their mouths with fabric so as not to harm even a microscopic bug. Though in our present incarnation, we are too big, I believe, just too large in a world of very small, to avoid crushing and inadvertently destroying. The microbes and viruses that hurt and kill us might say (if they had sentience and could communicate) that they are just too damned small to keep from harming us.

I was brought up to see both sides, to such an extent it often paralyzed me; in addition, my own needs and experience were often left out. Not a formula for a life where I could stride forward and make my mistakes and own them. (Working on it!)

Sometimes someone passes through your life and you experience each other and then the moment is gone. I have had that on a train; people hand me a piece of wisdom from their lives, we smile at each and then they are gone. Like my dainty sulphur. 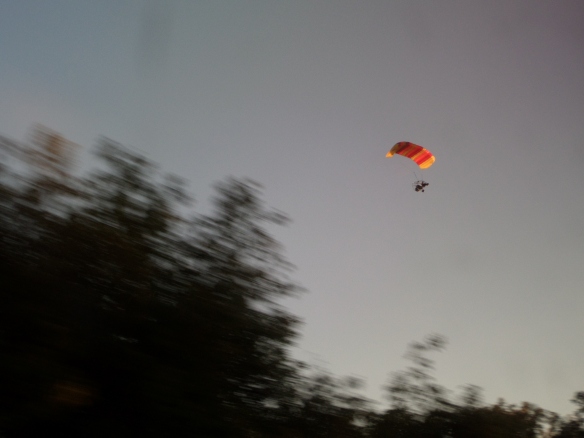 If I hadn’t looked out the train window at that very moment, I would have missed this adventurer, flying boldly in the fall sky.