Surprise! on the bedspread

February 17 2015. I can’t believe it—thought I’d lost the butterfly, that our short term friendship, for that’s all it could be, was done; but when I went into the bedroom, there she was, after two days, on my bedspread! I laughed out loud, even skipped a little, couldn’t believe it! How did she get there? Why was she there? Giddy, I got my spoon of sweet water in case she needed it.

She wasn’t quite so excited as me–or thirsty; perhaps she found other sources for nourishment in the kitchen when I wasn’t looking. I still couldn’t believe she was back. If she were on the bed in the night, I could have crushed her, but apparently she is busy taking care of herself, flying around my apartment, exploring and living her own short little life.

I want her to go back to the kitchen where it is safer but she is having none of it. Thank you very much, I prefer the rug under your bed. Like my children as infants who pressed their lips together to refuse more baby oatmeal, she knows what she needs better than I.

So she’s had a drink and her picture taken again, and I’ve left her to her own devices. 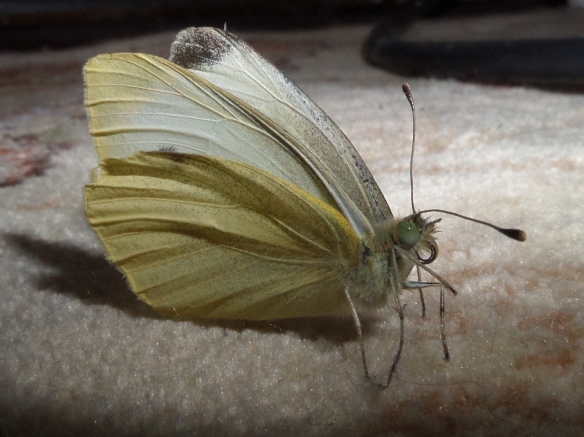 Resting on the carpet.

I didn’t know I’d missed her so much. Or rather, that I would be so excited to see her again. I’ve gotten to know more and more, as I’ve read about the butterfly life cycle, Dainty Sulphurs, and different families of butterflies. (Did you know that Monarchs have six legs like the other butterflies, but two of them tuck against the thorax, having lost the ability to aid in walking?) I fear showing too many photos of her to my friends and blog followers, like an obsessed parent incessantly pushing phone images of their cute child.

A friend came by, curious about the butterfly visitor and when I talked about feeding her, said, Oh I think you are not supposed to use honey; I know with hummingbirds you use white sugar. Just in case, I start mixing sugar and water….

I’m talking to a butterfly, in my bedroom. 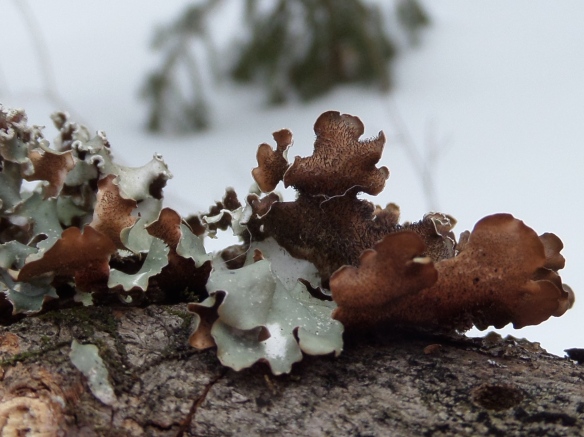 A more external metamorphosis, of wood into nutrients, at the north end of Partridge Run.

The idea of metamorphosis now strikes me, all those grade school posters about caterpillars becoming butterflies, stories of ugly ducklings becoming swans. What being “ugly” meant to me as a child—a label I took on as a chubby kid with glasses. It still horrifies me that the duckling—actually a cygnet—was considered ugly and had to grow into some culturally defined idea of perfection, of others-judged beauty.

What if, instead, we felt perfect as we are, comfortable in our skin even as we grew into something else? That each stage, even in its clumsiness, was considered beautiful?

I was told once that in the metamorphosis of a caterpillar, its face melts. What a thought. In order to change, you will not be able to recognize yourself, because you change so very dramatically. Am I willing to take on that kind of scary change?

When I did research and found the original article, (by Ferris Jabr, at ScientificAmerican.com, August 10, 2012) I learned that it’s not just the face that melts—the whole caterpillar dissolves inside the chrysalis. Releasing enzymes, it digests itself, creates a kind of caterpillar soup, Jabr calls it, though with special organized cells called “imaginal discs” that help it reorganize to the next stage, into the butterfly with wings, antennae and mature sex organs.

What lessons for myself from this re-encounter with the Dainty Sulphur? To take time apart, build my own chrysalis for change, tuck in to look within myself, then take on the change, and emerge. Not to emerge too early. Not to do it without the structure and support I need. To know flying—whatever that means for each of us—is possible even if we can’t imagine it right now.

We have within us what we need for the next step. The taking of the next step can be messy, scary, and look disorganized, but it is exactly as it was and is supposed to be, when we move into it.

Yes (of course), to be continued. 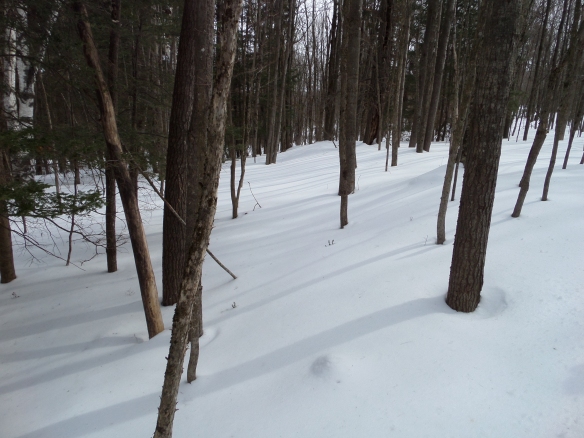 Winter sun in the woods, waiting as things grow and change under the snow.