I had wanted more beauty in my life. Isn’t that often the way affairs go?

More specifically, I yearned for beautiful flowers in my garden. I craved a break from what sometimes felt like workaday vegetables and their attendant chores. I enjoyed the healthy produce but after four summers of effort, desired a relationship that was independent, required nothing past superficial attention, and gave me more than I gave it. 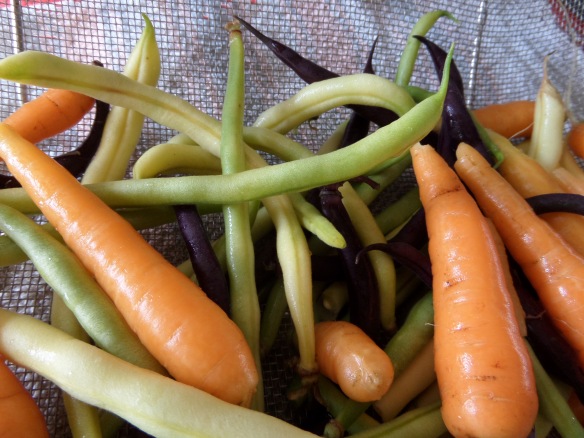 Back in April, from the bin of donated seeds at the community gardens office, a hand drawn packet from the company Renee’s Garden shone out at me. I’d heard of something called borage oil, which sounded medicinal and icky—like cod liver oil—but I didn’t know anything about borage flowers. The front read “Kitchen Herbs,” pictured five-petaled blossoms and promised, “pollinators love the flowers of this fast growing plant.”

The back panel assured that in addition to bees and ants, children adored blue borage and further, the blooms could be frozen into ice cubes or sugared as cake decorations. Traditional herbalists gushed that borage was thought to “lift the spirits and inspire courage.” Visions appeared in my head of feathery green shoots and midnight blue petals that skipped up and down on the slightest breeze.

When the sprouts came up, I fell instantly in love, in spite of their appearance not matching my fantasy. 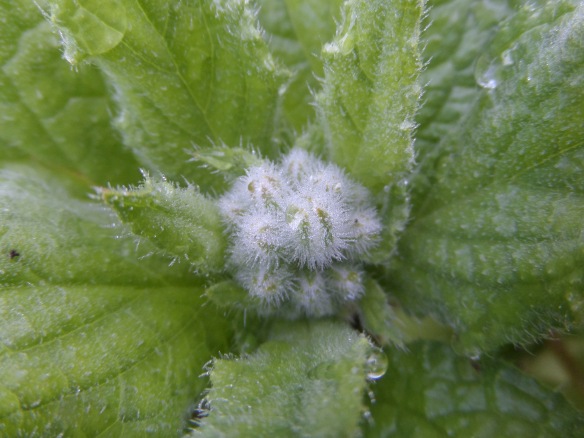 No leggy stalks and stems–instead furry, silvery, thick-trunked bushes emerged. From somewhat more delicate branches, clusters of stems drooped. The flowers sparkled at the tips. Like Jack’s magical beans, more and more plants germinated and grew tall, taller. They crowded out of their designated plot and into the peas, the tomatoes, the carrots, the peppers.

Borage bloomed a lighter and yet more intense blue than I had imagined. Many individuals budded pink-blue, then deepened into a pale ultramarine. Once in a while a flower stayed vivid cotton candy color through maturity. 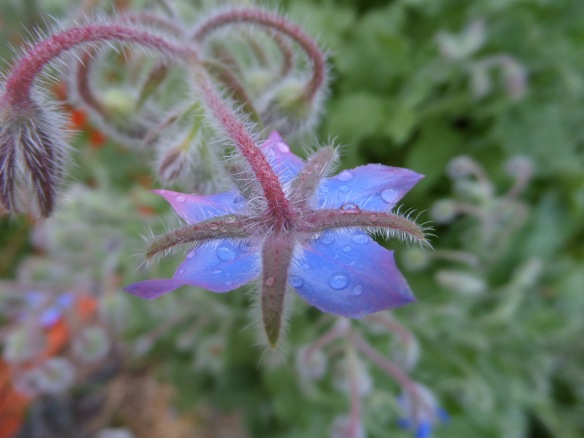 My eyes could not get enough of them.

Borage in the morning–

–makes my heart ache and sing.

The best time was early, when dew still hung like drops of cool moisture on warm lips; early was when the light came from all angles. Before dawn, I would roll out of bed, slap a baseball cap on my flattened dirty hair and hurry on garbage-strewn sidewalks to unlock the garden gate.

Blue borage accepted me as I was. It patiently waited as I stumbled in, half awake. My own tendency to be thick-stalked and overly prolific was not important. I, in turn, accepted its prickles, which never worked under my skin like the hairs on cucumber vines.

Morning after morning, I slow danced with blue borage, marveled the way a new lover does, at its beauty in the light, its shy loveliness in shade. The color softened through petal edges, like a misty photograph. I melted at the sight of these sweet little flowers, stars happily star-gazing, in the dazzle of dawn.

The bees and the ants could visit, but these were my flowers.

Over time I discovered that to harvest borage, I didn’t have to pinch hard on the open flat flowers. If I waited just a bit longer for full ripeness, the petals would pull slightly away from the fuzzy sepal, like a forward fold in yoga. Then the blossoms could be teased off with gentle pointed fingers into my cupped palm.

On the seed packet, the flavor of borage was advertised as mild, like cucumber. It was a change from the peppery orange nasturtiums from personal gardens past, or the vibrant but grassy-tasting pink and white orchids on restaurant plates.

To me they were strangely reminiscent of the Catholic communion wafers of childhood. Those dry, pale, wheat colored rounds from Sunday Mass had barely a flavor at all. Yet borage was herb-crunchy too, the petals, intensely white center and black stamens, and all that aching blue-pinkness.

Exotic and yet familiar. I smiled at their oddness.

I nibbled borage as I weeded and harvested vegetables, and collected tiny floral gifts for later. They were snuck into salads, with their unapologetic blue, and yes, into ice cubes for sexy summer sangria.

Half-way through July, my beloved bushes were trounced by a woodchuck. The pushy rodent sneered at my floppy fence and leapt it with ease. He burrowed and jumped and thumped onto my blue borage plants, beating them up, breaking their juicy stalks, crunch! on the way to strip the tricolor beans of their own deep purple beauty. 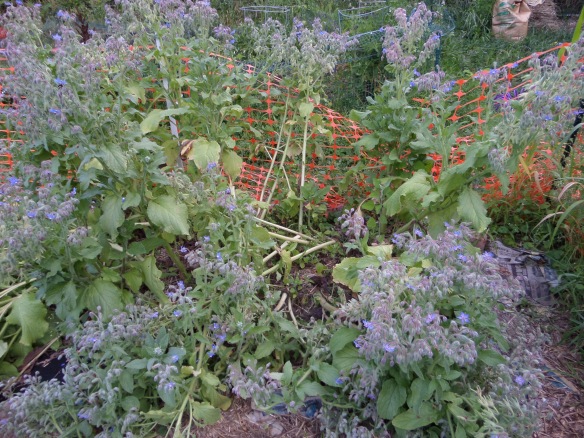 But borage would not disappoint me.

A week later, I found shoots coming up from the stomped stalks. Bunches of fuzzy leaves, short perhaps but strong, determined—courageous even.

Like a steady love, the plant grew up from the ground once again. Its resilient arms reached out for me and soon bristled with color. 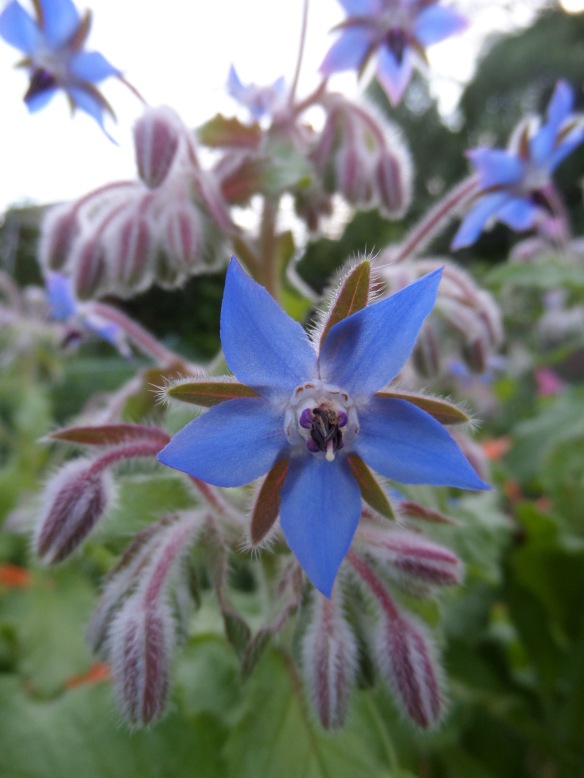 By early September, fewer and fewer flowers nodded on the stems, until I went out of town and was surprised not to think about the borage while I was gone—or even when I came home. I’ll need to put the garden to bed this week, and I know that now, since the first frost, what is there will not resemble my summer infatuation. I already feel a tinge of sadness.

Is this the way things always end? I ask, and then answer: Of course. Annual flowers are always destined to live but a few short months.

In addition, I realize it wasn’t just a meaningless or superficial affair; instead, it was one of many gifts given to me, when I have paid attention and let myself fall in love with the natural world.

Winter approaches and along with it, the inside loves of my life. I must return to the hardy, four-season relationships that have patiently awaited me while I tarried outside.

Perhaps blue borage and I will dance again some future June.

Darkness falls, but the sun will return, next summer.

***For anyone in the New York Capital District, please come over to my business website for information about my first nature photography show, at the Bethlehem Public Library in Delmar NY, running for the month of December 2015.