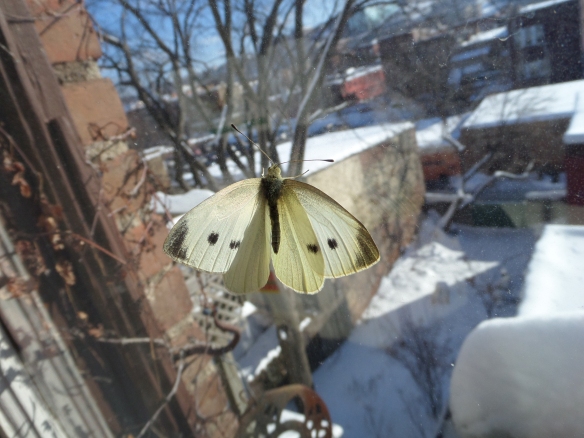 At first I thought it was a moth. My internet research indicates it’s a butterfly, and might be something called a Dainty Sulphur. I have no idea how it materialized in an upstate New York brownstone in the middle of winter.

Could it have been hiding in my apartment and if so, where was its chrysalis? Could it have traveled from another part of the country, the pupa attached to the dried moss of my December birthday amaryllis? Or did I carry it in with my bags of produce from the Niskayuna Coop?—after all, bananas, grapefruit and even paper bags come from far away.

Further investigating Dainty Sulphurs, I find its arrival proves somewhat unusual—they are not native and don’t overwinter here or fly in every year like an immigrant species; in fact, they are considered a vagrant species, one that only rarely comes up from the south.

It seems to be a summer phenotype, too, because of the yellow hindwings. In a winter individual, the hindwing would be greenish-gray, with additional black patches to absorb solar heat. 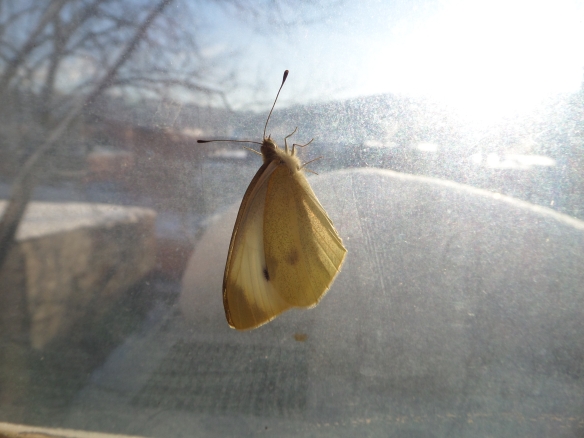 If I were to anthropomorphize—which as a scientific person I tend to avoid—right now it looks like the perhaps-summer butterfly is perched staring out the window, yearning for the sun, a whole-insect-body aching for outside, to move and flutter and find nectar and other butterflies.

When I go to bed, the butterfly is still there.

February 12, 2015. I know if I let it outside, it would freeze. I know inside, it will not survive, though how long does a butterfly live anyway? However, it certainly won’t mate, and I don’t quite know if and what it needs to eat and drink.

My sentimental heart, in spite of my lack of knowledge about butterflies, caused me yesterday to put out a little water-honey mixture, like you would for hummingbirds. This morning she—further research indicated it’s definitely a Dainty Sulphur but probably a female because she doesn’t have the reddish-orange hindwing scent patch of a male—this morning she was still resting, midlegs and hindlegs on my peeling paint window ledge, forelegs on the icy glass, peering out with her compound eyes.

Do butterflies sleep? She’s in the same position, and hasn’t touched the honey-water I dripped onto a tiny flipped-over plastic cup. (I thought it was a perfect shape, like a birdbath with an edge to rest on.)

Her position looks like: Mom, Mom, I want to go out and play! Like my kids used to sit on the back of the couch, heads in palms and feet warm on the radiator, looking out into the snowy exterior, thinking of all the adventures to be had later in the day, once breakfast was done and snowsuits were put on.

But this butterfly has no snowsuit and I have none to offer it. If nothing else, I will at least accompany this creature as we both look out the window, into the deep snow, into the near future. I don’t want to be a well-meaning idiot, like those who “rescue” baby birds from perfectly fine nesting areas when they have ventured a ways from their nest. So I’ve gone online and further studied forms and colors, behavior, size (yes at 22 mm she is a Dainty), and learned that the honey-water is perfectly acceptable food.

Mostly I marvel once again at the variety of things I have not seen, or did not look for, that I am discovering now, thanks to my Dainty Sulphur.

(Many thanks to my favorite insect information and identification website, Bug Guide.net, and in addition, the North American Butterfly Association website. I invite comments, especially from lepidopterists!)

2 thoughts on “Part the First: Wherein the Butterfly Arrives”