The container that got me to thinkin’.

In my continuing quest to clean out kitchen drawers and cabinets, today I came across a glass jar. When I lifted its clear pear shape to the light, sediment clumped on the bottom and its once luminously deep red contents read cloudy and brown. The faded Sharpie writing on the lid, in my hand: Sour Cherry Syrup 8-17-03.

I learned to make preserves in 1989, when I lived in mid-Michigan with one small child and another on the way, and a spouse in graduate school (soon to be in medical school). The trees in South Haven and along Lake Michigan were studded with peaches, sour cherries and other stone fruit; I’d drive east as each came into season, or search out flats of fruit in the local market.

Peaches were the first item I mastered how to slice, cook, pack into sterilized jars, and boil in a water bath: peach halves in sugar water, peach jam, peach-apple chutney. Next, I expanded my “putting up” to blueberry and strawberry preserves, then hot sauce, and bread & butter pickles.

But sour cherries were my favorite juicy treat.

After we moved to Chicago, I could still get cherries, thank heavens. Some farmers would bring their wares up to the north side where we lived and from one farmer in particular I would order a 40 pound box of pitted and frozen cherries, available for pickup in mid-August.

Defrosted cherries would bubble along with the pectin thickener and cup after cup of sugar in a huge cooking pot as the canning day progressed. Mason and Ball and “Atlas StrongShoulder” jars were filled with the concoction, screw-tops carefully put on and the jars lowered into the water bath. By early evening, rows of glistening glass had been pulled out and placed on a wooden rack, out of any drafts in the steamy kitchen that could crack a jar that cooled too quickly.

Within an hour, always to my great relief, lids began to thwip down in a vacuum seal; knowing at least a few had been made safe for long-term storage, I’d shower and go to bed as the thwips continued into the night. Next morning the lids were wiped off and, one by one, labeled with that ultra-thin black marker, then placed for storage in cardboard boxes.

In addition to dozens of finished sour cherry preserves, some jars would hold only syrup, scraped from the bottom of my white enamel saucepan, when the solids were gone but there was still thickening ruby-red syrup I couldn’t bear to waste.

This jar was just such a jar.

The week it was sealed was a usual week, back in 2003. My calendar tells me I’d weeded the hostas and wildflowers in the front garden and the kids’ long anticipated beach day was cancelled due to rain. I’d bought the pectin and sugar on Saturday, and picked up the cherries at the Skokie Farmers Market on Sunday after church. A third year medical resident by now, my spouse had been on 24-hour overnight call in the hospital Tuesday and then that Sunday.

Wild geranium (also known as Cranesbill) from my Illinois garden.

The following week 15 clients showed up to my massage practice, martial arts classes and a Renaissance Faire filled the kids’ days, and the spouse was gone for two more overnight calls. All that activity was, I am sure, flavored with the typical couple of jars that–darn! we’d joke–didn’t quite seal and–double darn!–had to be used up right away. We grinned over buttered toast topped with cherry preserves and later each day cherry syrup in seltzer or cola or on ice cream.

I put up preserves and syrup summer after summer until 2009, when I moved our family household to New York, and then the spouse left, to do permanent overnight call, with another woman.

My first response, finding that lonely jar this August? Oh no! This will be the end of it! No more, those golden summers, that delightful food, all gone, along with the family life before empty-nesting, before a new state, before divorce.

In fact, this last jar is probably useless, not safe to eat. I’ll open and sniff it, then pour it down the drain.

But my second response? I’ll dump and wash that jar and store it with the others up in my closet, boxes and boxes of clean empty jars waiting for fruits to ripen.

Perhaps something novel should be put up in those Masons and Balls and Atlas StrongShoulders: plums? pear butter? cinnamon applesauce?

Or maybe I’ll call that farmer who delivered in Skokie, and ask if he ships to New York. 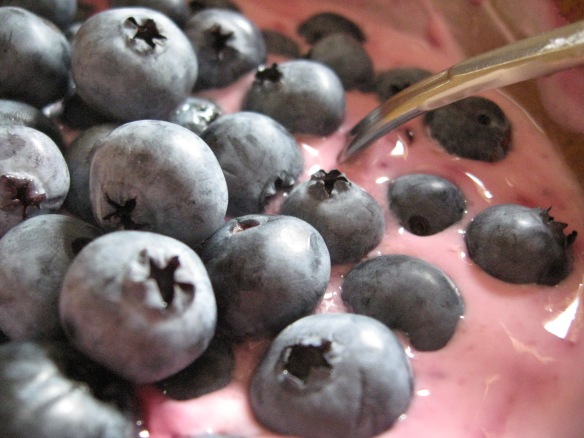 This season’s blueberries, floating on top of Greek yogurt blended with some home-made blackberry preserves.