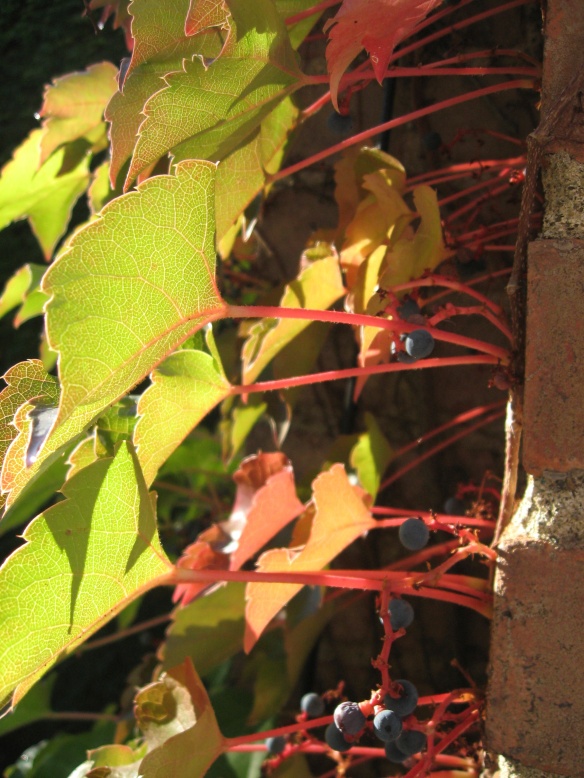 Outside my kitchen window.

It is September and the Boston Ivy has signaled autumn.

Stems went red in mid-August; now the big green dots of berries that popped out over the summer are deepening to blue. Shiny leaf umbrellas shade this transformation until breezes quiver the ivy and pull it away from the brick, revealing the ripe fruit.

Berries become obvious in the fall.

The part of the ivy that I ponder more deeply belongs to spring.

The building kitty-corner to my kitchen window.

For five years—five springs—I have meditated on a brick partition perpendicular to my kitchen window, along with the wall around my window and the next building over.

In March they are all covered with what looks like dried up vines.

In April, from those ramblers, brown-horned growths issue, then beginnings of leaves, cherry and lime colored. Under the new foliage, tendrils creep that extend the plant’s reach; at the ends of those tendrils are what I can only see as little alien pod-feet.

Leaves and…what are those?

Squishy wet, secreting calcium carbonate as an adhesive, they venture forward to attach the ivy to the brick, suction cupping step by step to climb the buildings and cover them with more and more leaves.

These sticky pads are called holdfasts. 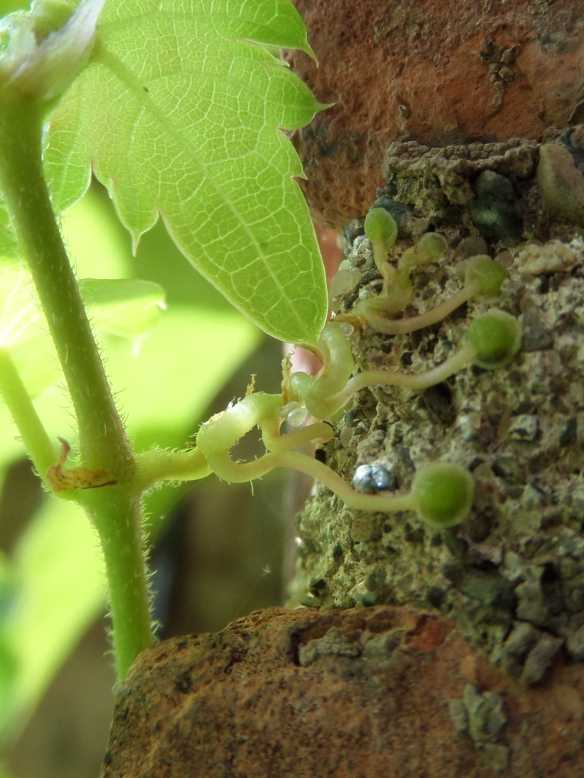 The wind whips the moist leaves, pulls at the vines, and the holdfasts? They hold.

Every year, Nature’s prompt: What are the holdfasts in my life?

What are the things that, once I’ve ventured forth, clasp me firm and fast to my true self, keep me from blowing away?

—That don’t seem that strong but really are.

—That form even as I merely think about moving.

—That prepare in advance for the eventual step, wherever it takes me, whichever surface and direction.

—That understand (whether I am willing to acknowledge it or not) there will always be a next step.

Whatever those holdfasts are, I need to identify and guard them, because they keep me stable and safe, and are absolutely necessary for growth and expansion, no matter how insignificant or odd they look to the rest of the world.

A visitor to the ivy.

As summer marches in, bigger leaves follow the small ones, which expand to cover increasing territory; then those green berries appear while I am out in the mountains and going lake swimming and kayaking; next a smell of fall blows before I think it is due–while the petioles blush and glow from the bottom of each leaf to its base–which is right now, here in September. When I start to need a jacket for bike rides, the leaves turn red and brown and yellow-white, like Neapolitan ice cream, sometimes all on the same leaf.

Finally groups of birds arrive, luckily often on days I am home to watch. They fly at the walls, flapping crazy wings, picking at the berries. Like a scene out of Hitchcock’s The Birds, they attack over and over again, determinedly seeking purple-blue morsels and knocking the already loosened French vanilla, strawberry and chocolate leaves down to the yard below. As that group moves on, some berries are left, to be picked off by the next day’s migrating flock.

The holdfasts darken but remain. Empty brick walls are looped once again only with vines, where small clumps of snow find a precarious perch in January and February. Then the light changes again and signals the slow reaching out of buds and tendrils—and fresh holdfasts to join the others.