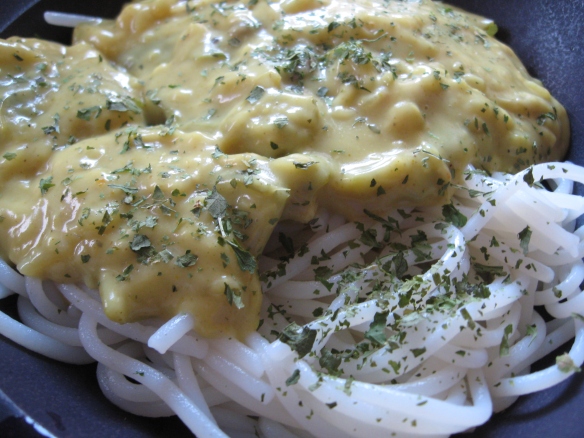 Curried chicken, one of my childhood comfort foods, over rice noodles.

I’m having a hard time settling in this week, as winter holidays come and go, approach and recede, as personal and national losses do the same.

So I go to the kitchen.

The hills and bare trees and apartment roofs that stretch to the east bear witness through the windows. I write as I do my little jobs–if I think of them as little, building like snowflakes into larger things, they are easier to begin.  I jot down thoughts, recipe ideas, insights that spring on me like the birds who dive past.  Sunrise glows dimly through the clouds.

Since the rest of the world feels sad and chaotic, I create order in my corner of it: there are the clean dishes dried and warmed by the gas stove pilot lights. Now to stack the mixing bowls by size and slip them into the cabinet, organize the post-Cookie Party baking pans, and ponder which ingredients are to be used up next out of the freezer and fridge. Here’s the softness of a purple dish towel, water splashing everywhere while I clean the last of the teacups, and that final step: wiping down the counters and sink, sweeping the floor. Now to the cooking.

Frozen chicken thighs started me off, and some of the Community Garden string beans I had managed to harvest and de-string and freeze before my last visit with J–and a rock-solid jar of cooking juices, added to each time I’d roasted or baked chicken since June. When defrosted, the glass was golden-full of olive oil, salt, floating bits of garlic, Pappadew sweet piquante pepper seasoning, and chicken fat.

The broth blended with milk and sautéed dried onion on the way to my mother’s Curried Chicken sauce. The original recipe appeared decades before curry was a household word in the U.S., in Redbook, or Good Housekeeping, or some other 1960s ladies’ magazine; I’m sure they promised an exotic meal, able to be put together in 30 minutes or less, conveniently utilizing leftover cooked poultry.  Originally the sauce was served over rice (red-boxed “Minute Rice” in Mom’s kitchen) mixed with dried parsley, always with a side of canned pineapple chunks.

But horrors!–the bag of brown basmati rice (standard in my interpretation of the dish) was empty, and so I hurriedly dug through the cabinets to find rice noodles, purchased for another, more modern curry dish–Thai coconut and Kaffir lime.  Since the comfort-food sauce was almost finished, I quickly boiled the noodles like a wheat-based spaghetti, and they turned out to be a wonderful substitution.

After eating, I walked into the rest of the apartment where chores awaited patiently: the end of year budget, memorabilia to be sorted, work research and networking to be initiated.  I brought in the sense of order from my clean kitchen and home-cooked meal, lit a candle, later burned some incense, and calmly did small parts of huge projects.

I drank tea, cried about tragedies, and thought about some joys as well.

Candle and tea, for the shadowed afternoons.

Later in the week I wanted to use up the rest of the dried noodles, so I hot-soaked them and then stir-fried with a jarred Pad Thai sauce I’d bought for “some day when I wanted Thai but didn’t want to order out or cook from scratch.”  I managed to employ this sauce, the rice noodles, about ten frozen raw shrimp left from Thanksgiving appetizers, some eggs and broccoli and aging celery, even had salted peanuts hiding behind the dried pasta; only had to buy fresh cilantro and bean sprouts.

I trust that if I eat up all the food I have, there will be more.

Shrimp pad thai, with crushed peanuts and cilantro leaf. Oh, and broccoli and celery and bean sprouts. And a little egg.

This week, in the spirit of being empty, I even skipped a writing deadline, deliberately watching the clock tick down and observing my reactions. The piece I wanted to submit just wasn’t ready yet, so I didn’t force it.  I trust that it’s stewing inside me, and I’ll know it’s ready, if I keep close watch on the pot.

So instead of indulging the A+ student, I hiked for hours along the Niskayuna Bike Path, on the last sunny afternoon predicted for a while, then hunkered down for the blowzy day on Friday.

I trust there will be other opportunities in my writing life; that missing this one won’t be the end of me.

Almost-official-winter reflections in the Mohawk River, along Niskayuna Bike Path

I conversed on the day of solstice with author E.P. Beaumont (http://epbeaumont.com).  E.P. describes late fall as “the end of things, the beginning of things, a gateway time, where the gates to the other world are wide open–and remember the other world includes The Past, as well.”  This is a time for processing, meditating, mulling. It reminds us of other darknesses that will inevitably come, and trains us to hold on to the memory of light and lightness, which will also inevitably return.

Though deeper cold chills the landscape and bits of snow flew outside this morning, winter solstice has come and gone and the days increase, even if imperceptibly for now.  I will continue consuming my culinary caches, making order, making messes, identifying my life’s work through my daily work. Lighting candles and cooking noodles.  Drinking tea. Trusting I carry my peace and emptiness with me, into the darkness, as I seek the growing light.

I usually double all the ingredients, thoroughly mix in more flour than recommended so the sauce will be thicker, and whisk the roux incrementally with the liquids, before heating, to avoid lumps. This time I also added 32 oz of cooked Community Garden green beans along with the chicken. And more chicken than recommended. Of course.

Shrimp Pad Thai. I used a whole jar of Thai Kitchen Pad Thai sauce, and followed the instructions on the label for stir-frying 2 eggs first, then the shrimp, then the sliced veggies, mixing in bean sprouts at the end, topping with crushed peanuts and cilantro. I followed the directions on the rice noodles for hot soaking, then stir fried them with the sauce, again per the Thai Kitchen label. Nice and easy….