This is where I need to be right now, not perfect and remarked upon–not hearing Oh my isn’t SHE marvelously whole!; instead: blown open, curled back, the wind and rain on me, feeling everything full-on, letting the fear go.

I never saw the tulips this year–not in their full form, anyway.

My monthly book club rotates houses, and traditionally in spring one particular member hosts whose home and spectacular gardens overlook the Hudson River. Masses of sunset colored, black, and pink-with-white tulips usually quiver in the water-side breezes along with flowering Japanese plum, bleeding heart, and rhododendrons.

After discussion of racism and The Warmth of Other Suns; after mimosas, white asparagus, quiche, and lemon cake, I wandered outside. 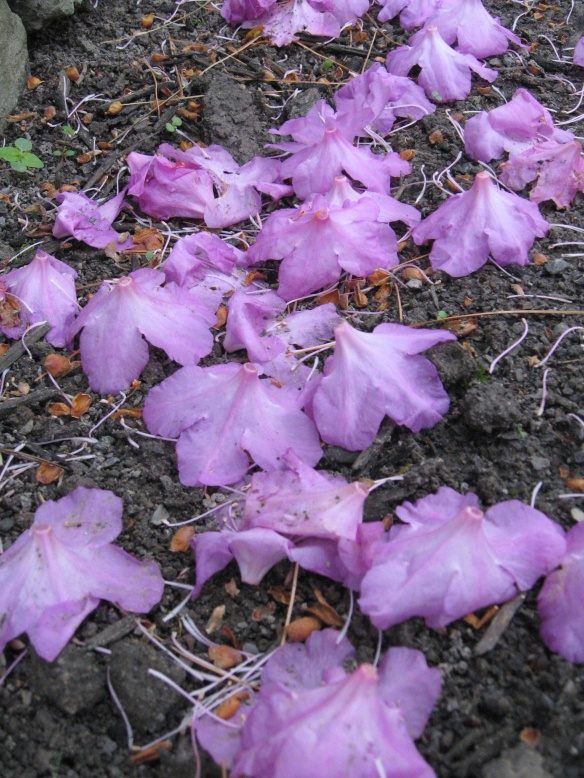 Rain splashed these purple rhododendron flowers to the gravel path. Upside down, they glow pretty on the ground.

Though eyeful after eyeful of azaleas still sparkled in this Mother’s Day-morning rain, the tulips were finished.

Something unexpected revealed itself in the decaying blooms.

From shimmering swaths of bright colors, the tulips had individuated, dying back in distinctive ways: petals twisted here, leaves dropped there, a broken stem over yonder.

They were beautiful. They reminded me of–myself.

Dying in the present, shifting to new forms of being.

As no-longer-useful parts wither and fall, the hidden bulb is beginning to prepare for next season’s growth spurt.

Discolored, browning areas preview inevitable desiccation, but even as they slump ground-ward, the petals flow, twisted like a woman’s pashmina wrapping around her in a windstorm, petal sections balancing differently from the original cup-shape.

Collapsing lopsided like a blimp or balloon, taking up more width, deflating and yet expanding. Free to curl and twirl now, as moisture escapes. Is the color more or less intense? 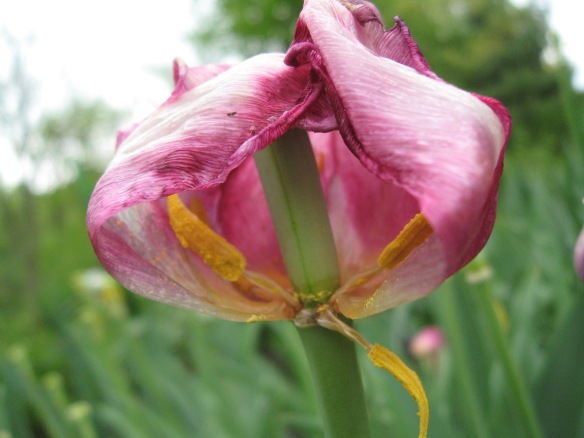 Like a child hiding under a floppy hat, peek a boo with three anthers a-tumble.

The petals have wilted into a swirling skirt with rolled frilly edges. If the bottom of the green stalk-shaped style were a waist, the yellow anthers on their filaments are multiple arms in repose, between dances. Movement, now rest.

After five weeks recovering from and growing into the immensity of Part One, quietly studying and practice-teaching and building my skills, very soon I return for Yoga Teacher Training Part Two.

Exposed and fragile. Roots deeply set months before now, unobserved by most.

Dying in the present, shifting to new forms of being.

As no-longer-useful parts shrivel and fall away, my inner self begins to prepare for this next period of growth.

The center style is topped by a pale yellow stigma, and two perfectly formed black anthers hang from withered filaments below. Vulnerable, and yet confidently humorous–if I may anthropomorphize a bit more–they resemble two paddle-hands, or clown feet hanging. What sly comment does this former-flower want to share about the next round of colored tulip-cups?